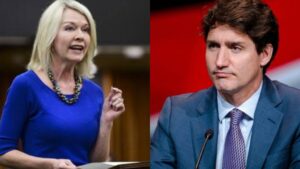 The Canadian Prime Minister Justin Trudeau announced he is removing emergency powers police can use after authorities ended the blockades at the borders and the occupation in Ottawa by truckers & others opposed to COVID-19 restrictions..

He said the “threat continues” but the acute emergency that included entrenched occupations has ended. His government invoked the powers last week and lawmakers affirmed the powers late Monday.

“The situation is no longer an emergency, therefore the federal government will be ending the use of the emergencies act,” Trudeau said. “We are confident that existing laws and bylaws are sufficient.”

The emergencies act allows authorities to declare certain areas as no-go zones. It also allows police to freeze truckers’ personal and corporate bank accounts and compel tow truck companies to haul away vehicles.
The trucker protest grew until it closed a handful of Canada-U.S. border posts and shut down key parts of the capital for more than three weeks. But all border blockades have now ended and the streets around the Canadian Parliament are quiet.

“We were very clear that the use of the emergencies act would be limited in time,” Trudeau said.
Trudeau had warned earlier this week there were some truckers just outside Ottawa who might be planning further blockades or occupations. His public safety minister also said there was an attempt to block a border crossing in British Columbia over the weekend.